I don't want to hear it! 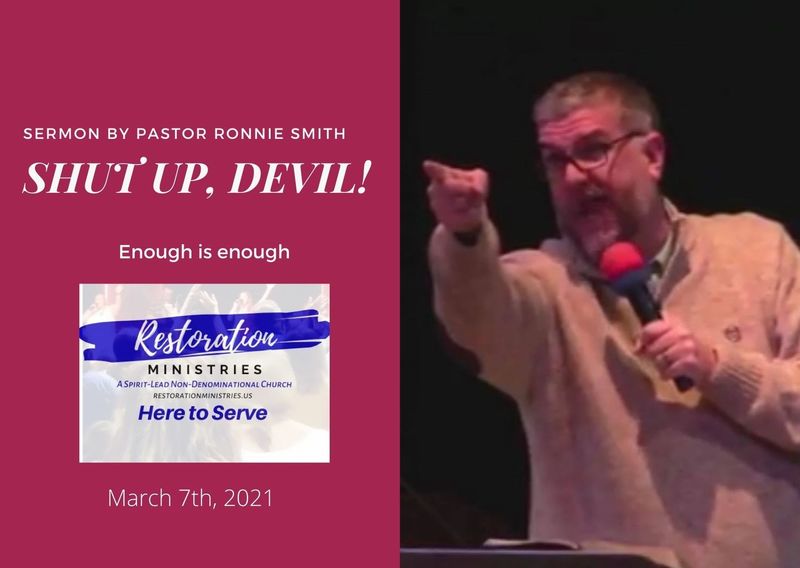 Shut up Devil! Mark 1: 21 Then they went into Capernaum, and immediately on the Sabbath He entered the synagogue and taught.  22 And they were astonished at His teaching, for He taught them as one having authority, and not as the scribes. 23 Now there was a man in their synagogue with an unclean spirit. And he cried out, 24 saying, “Let us alone! What have we to do with You, Jesus of Nazareth? Did You come to destroy us? I know who You are—the Holy One of God!” 25 But Jesus rebuked him, saying, “Be quiet, and come out of him!”  26 And when the unclean spirit had convulsed him and cried out with a loud voice, he came out of him.  27 Then they were all amazed, so that they questioned among themselves, saying,  “What is this? What new doctrine is this? For with authority He commands even the unclean spirits, and they obey Him.” 2 28 And immediately His fame spread throughout all the region around Galilee.   Mark 1:34 Then He healed many who were sick with various diseases and cast out many demons; and He did not allow the demons to speak, because they knew Him.   Why are we allowing the enemy to speak! -       Jesus simply shut it down, He would nit allow it. -       We set around, and let the devil speak right through our tv’s and phones. -       We let him speak through our smart mouthed children. -       We let him raise up arguments. -       Satan, is the accuser of the brother. -       When someone tries to remind you have your past.  SHUT UP! -       When the enemy starts with the accusations and stress, SHUT UP!   We need to use our voice!   Mark 11: 23 For assuredly, I say to you, whoever says to this mountain, ‘Be removed and be cast into the sea,’ and does not doubt in his heart, but believes that those things he says will be done, he will have whatever he says.   With our voice comes victory!   Matthew 16:19 And I will give you the keys of the kingdom of heaven, and whatever you bind on earth will be bound in heaven, and whatever you loose on earth will be loosed in heaven.”   Even the wind and rain, knew “the voice” Luke 8:24 And they came to Him and awoke Him, saying, “Master, Master, we are perishing!” Then He arose and rebuked the wind and the raging of the water. And they ceased, and there was a calm.   ·      Some of you, need to speak to the situation in your life, and stop letting the situation speak to you! ·      Shut up! Tell the devil you’ve had enough. ·      Stop listening to the gossip, doubt, unbelief, fighting, arguing, spiting.     Ephesians 4:29 Let no corrupt word proceed out of your mouth, but what is good for necessary edification, that it may impart grace to the hearers.   1 Peter 2:1 Therefore, laying aside all malice, all deceit, hypocrisy, envy, and all evil speaking,   Mark 5: 40 And they ridiculed Him. But when He had put them all outside, He took the father and the mother of the child, and those who were with Him, and entered where the child was lying.  41 Then He took the child by the hand, and said to her, “Talitha, cumi,” which is translated, “Little girl, I say to you, arise.”  42 Immediately the girl arose and walked, for she was twelve years of age. And they were overcome with great amazement.     First thing Jesus did, was clear the room…. Some of you, need to clean house. -       The devil’s bee  sleeping in our bed, eating from your cupboards -       He cleared the room, shut the noise, then said Talitha Cumi… I’m saying Talitha Cumi to someone today… Little girl… little boy  ARISE!